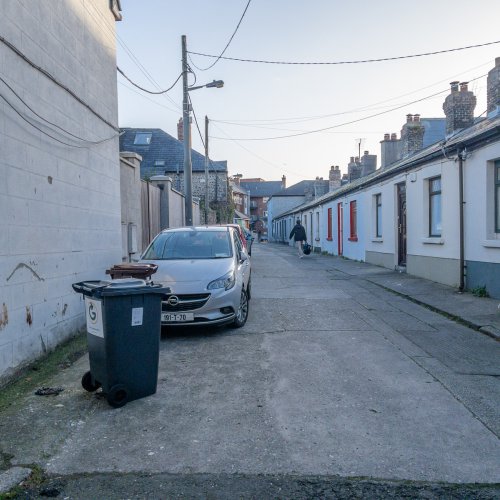 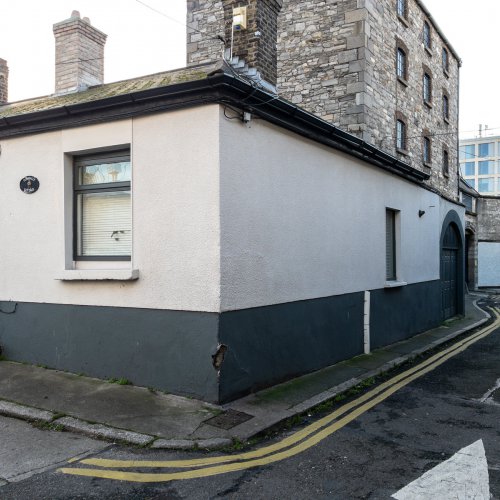 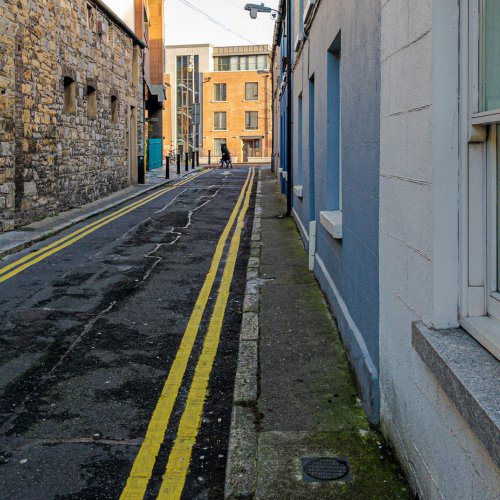 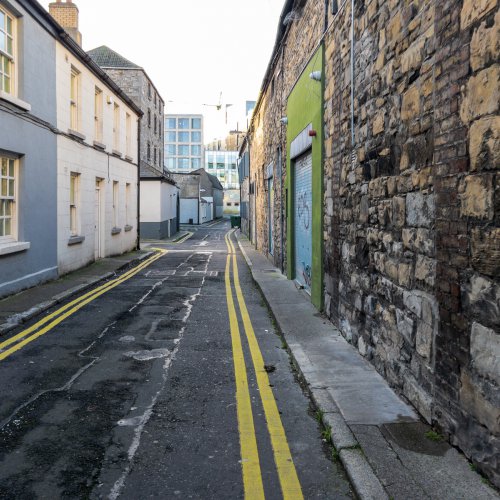 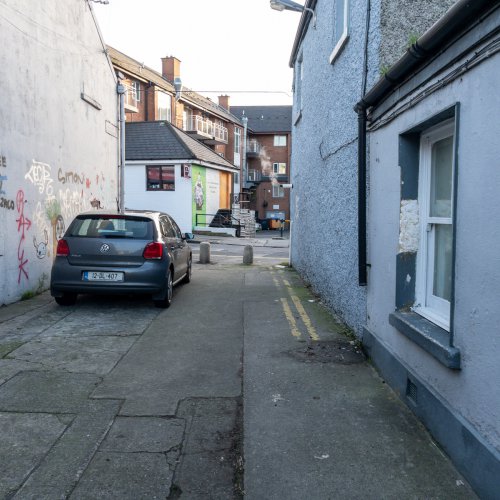 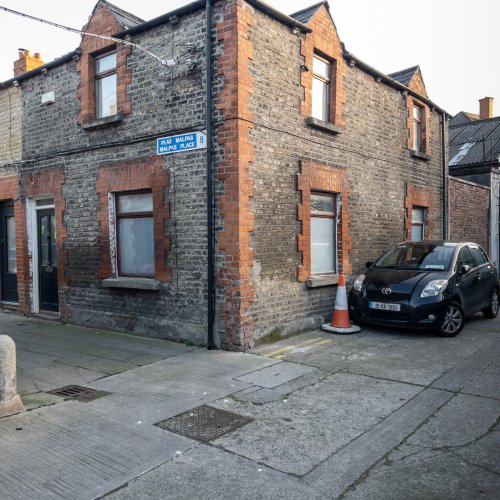 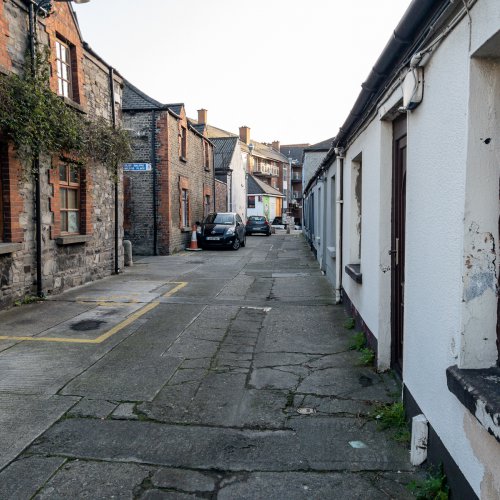 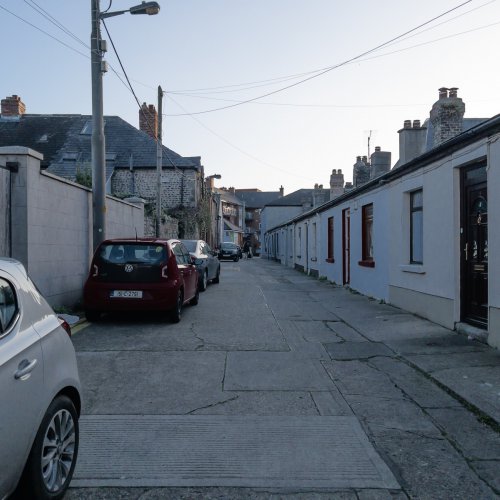 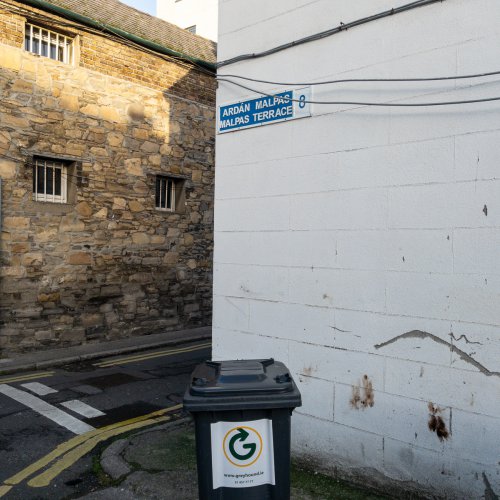 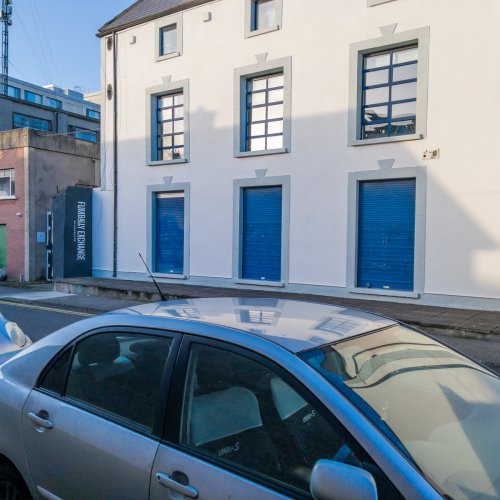 FUMBALLY LANE AND NEARBY IN THE LIBERTIES AREA OF DUBLIN

Fumbally Lane is a narrow and historic street in Dublin, Ireland, south of the city centre in The Liberties. It connects Blackpitts to New Street and is close to St Patrick’s Cathedral. Substantial physical evidence of the 18th & 19th century brewing and distilling industry buildings remain on both sides of the lane today, including storehouses and a five-storey malthouse. Most of these remnants of its industrial past have been converted to modern office use.

Today, Fumbally Lane is home to dozens of people living in new apartments and in mainly 19th-century houses, although three possibly date to the late 18th century. It is also home to clusters of mainly design creative businesses based in Fumbally Court which is a large 19th-century distillery building, remodelled as offices c 1990 and Fumbally Square, a development of new office space developed in 2005. The street remains a ’unique remnant of the mixed residential and industrial architecture that characterised the area’ A number of local enterprises have borrowed the Fumbally name including the Fumbally Café and Fumbally Exchange, a non-profit community of design professionals founded in Fumbally Square in 2010. The name Fumbally is a peculiar one and a name that has provoked a wide range of theories and suggestions as to its origin. The street is officially called Fumbally Lane today or Lána Fumbally. It has not always been called that and has had many name variations since 1721.

The lane first appears in Charles Brooking's map of 1728 without a name and with variations in subsequent maps including John Rocque's map of 1756 as 'Bumbailiff’s Lane' and in Wilson's map of 1798 as 'Fumbailie’s Lane'. It is mistakenly suggested by the Rev. Mr. McCready in Dublin Street Names: Dated and Explained that Fumbally’s Lane (as it was then referred to in Thom's Directory) was just a ‘corruption of Bumbailiff's-lane’. Fumbally's Lane is also the name James Joyce uses in chapter 3 of his novel Ulysses where he refers to "the tanyard smells" "Bumbailiff" is a derogatory term for "a bailiff or underbailiff employed in serving writs, making arrests."

However, there is some evidence that the name derives from a local Huguenot family named Fontvielle, Fomboilie, Fombily, Fombela, Fonveille and or Fombally. The name appears differently in a wide variety of sources. Christine Casey refers to the street association with a Huguenot family called Fombily and confirming this, Peter Pearson provides two names: David Fombily and Anthony Fombily who were described as ‘skinners’. Pearson, in reference to a study on the houses the Liberties by Peter Walsh, confirms this from a 1741 lease given on two houses on 'Fombily's Lane'. There is further evidence from a Registry of Deeds entry of an assignment dated 7 October 1762, mentioned in the RSAI Journal in 1893 and from a reference to the RDS, written in 1915, referring to a Royal Dublin Society prize for life drawing in March 1746 was won by a 'Mr. Fombally'. These all suggest that a Fombally or Fombely family resided in Dublin and were associated with this lane in the mid-18th century. A 1788 Domestic Intelligence report in The Gentleman's Magazine mentions an assault on the corner of "Fombally's Lane." In addition, records retrieved from the International Genealogical Index show that Charles, David, Ester, Jacques, Jean, Jeanne, Phillippe and Susanne Fonvielle were all born in Dublin or christened at Peter St. Church and dwelling at Lucy Lane (now Chancery Place, Smithfield) at the beginning of the 18th century in the period between 1704 and 1718.

In the area of Dublin known as the Dublin Liberties it is common the refer to houses that are for sale as artisan cottages regardless of who built them. The Dublin Artisans Dwellings Company was a semi-philanthropic private enterprise established in June 1876 to provide quality housing for the city’s working classes, and to make a profit while doing so. Capital raised through share issues and Government loans was used to build houses. The rents collected – and the Company’s rents were always considered high – were used to repay the loans, maintain the building stock, pay dividends to the shareholders, and remunerate the directors. Most of the Company’s schemes consisted of terraces of single-storey cottages and two-storey houses laid out in groups of parallel streets, a template readily followed by Dublin’s municipal authorities and hence one that came to characterise whole areas of the city well beyond the boundaries of the Company’s activities.

The DADC was most active in building during the 1880s and 1890s, initially buildings flats, but these did not prove popular. With modest funds, the DADC bought land at low cost, for example from Dublin Corporation for cost price. Their housing developments were popular, consisting of single-storey cottages and two-storey terraced houses. As a cost saving measure, a small number of housing designs were used repeatedly across different building schemes.

The DADC selected their tenants, who were predominantly Protestant, with a large number of Dublin Metropolitan Police and army among their tenants. Between 1879 and 1908, the company built 3,300 homes for 16,000 tenants. The rents were always considered competitively high. The DADC's building projects were placed on hold during World War I, and were delayed in recommencing due to later rent strikes, with 3 further developments built between 1929 and 1933. Facing competition from local authority housing, the DADC started to sell off its houses from 1961 and concentrated on investing in commercial property.

The last of the houses were sold in 1979, and the company was renamed DAD Properties LTD. It was taken over by Rohan Holdings in 1984. Today I walked along the Grand Canal from Charlemont Street to Portobello as it was a beautiful day as you can see from my photographs. I then decided to continue on to Brighton Square via Rathmines which was really buzzing as if it was Christmas. HAWKEYE BY MARVEL STUDIOS THE NEW MURAL AT FEGANS

Because of the weather combined with Covid-19 restrictions this is my first time to take any photographs since the end of November.