A Folly is a building constructed for, aesthetic pleasure, decoration on the landscape, entertainment, amusement and fun.

I have noticed that a few accounts refer, in error, to the Summerhouse as the Tower.

The folly by the Whitechurch stream is known as the Tower or the Temple.  It is a decorative building with a practical purpose, an architectural device used to change levels from the lower path beside the pond to the upper path.  Originally there was a third set of steps leading up to the rooftop viewing platform of the tower (now changed for safety reasons). During the renovation of the tower a lower/basement level was discovered that had contained a 19th pumping system which may have been used to pump water to the fountain in the nearby walled garden.  From the far side of the stream there is a clear view of the different types of stone and the decorative way it is used on the building.

Throughout the late 18th and early 19th century follies were a fashionable addition to a garden or demesne.  Major Doyne who was owner of the house in the 1860’s is said to have erected an obelisk  in memory of the horse that carried him safely through battle in the Crimean war.  Patrick Pearse moved his school, Scoil Éanna, to Rathfarnham in 1910 and seems to have been very taken with the idea of it being a ‘Hermitage’ and a retreat from the city, nestling in the foothills of the Dublin mountains.

The Hudsons actually went so far as to build a Hermit’s Cave, complete with mysterious arcane carvings and a secluded stone seat for contemplation. In June 1913 Pearse began a series of articles in the Irish Freedom newspaper which he entitled “From A Hermitage”. He began by saying “I have only two qualities in common with the real (or Imaginary) hermit who once lived (or did not live) in this place: I am poor and I am merry”. The articles were published monthly, with the final one appearing in January 1914. In them Pearse reflected on the current state of Ireland and what Irish people needed to do to obtain their freedom. 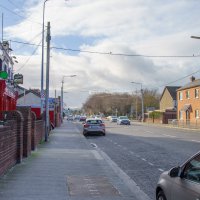 A WALK ALONG LOWER KIMMAGE ROAD

I walked from the High Cross at Harold's Cross to the KCR on the 9th February 2022 and photographed some of what I saw on the way.

A WALK ALONG LOWER KIMMAGE ROAD

I walked from the High Cross at Harold's Cross to the KCR on the 9th February 2022 and photographed some of what I saw on the way. 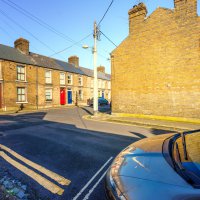 I do receive a lot of usefully reaction to my photographs so everyone who is interested is more than welcome to contact me.

I do receive a lot of usefully reaction to my photographs so everyone who is interested is more than welcome to contact me. 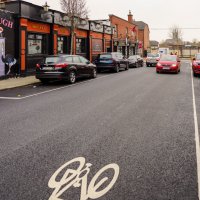