ASHDALE ROAD AND NEARBY ON THE MORNING AFTER CHRISTMAS DAY 2021

Extract from the property section of a national newspaper: "There is a lovely mix of period and between-the-wars houses, dozens of good schools within cycling distance and the facilities of Rathgar, Rathfarnham and Harold's Cross are less than a mile away. Shops in the village reflect a fairly well-to-do population which likes to eat out (plenty of interesting restaurants), cooks organic and has a sense of style in home decor and fashion."

Terenure originally called Roundtown, is a suburb of Dublin in Ireland. Terenure is a suburb of Dublin, primarily in the administrative area of Dublin City Council but with parts falling in South Dublin. It is located south of Harold's Cross and north of Rathfarnham, and also borders the suburbs of Templeogue, Rathgar, Kimmage and Perrystown. Terenure Cross (Vaughan's Corner) was at one time a terminus for the Dublin tramways, and is mentioned in James Joyce's novel Ulysses (Episode 7, 'Aeolus').

There were three tram depots in Terenure at one time, the main tram depot for the number 15 Dublin United Transport Company (DUTC) trams on Terenure Road East, another DUTC depot for number 16 trams on Rathfarnham Road, and the terminus of the Dublin and Blessington Steam Tramway on Templeogue Road. The modern tram system — the Luas — does not serve Terenure, but it is still served by bus routes numbered 15, 15a and 16 bus, among others. The bus route numbers were originally allocated based on historic tram route numbers.

The author James Joyce, who was born nearby at 41 Brighton Square in Rathgar on 2 February 1882, was baptised at St. Joseph's church on 5 February by Rev. John O'Mulloy.[ His mother, Mary Jane (May) Murray, was born 90 metres from the church at Terenure Cross in 1859 in the pub owned by her father, John Murray, called The Eagle House. 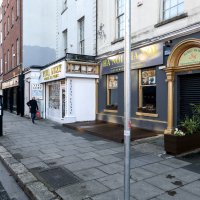 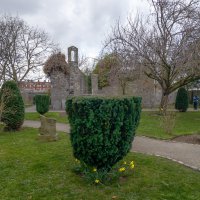 Ever since the demolition of Kevin Street College this old church has felt different, maybe because of additional sunlight.

Ever since the demolition of Kevin Street College this old church has felt different, maybe because of additional sunlight. 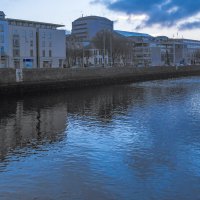 A WALK ALONG THE CITY CENTRE QUAYS JUST BEFORE SUNSET

A WALK ALONG THE CITY CENTRE QUAYS JUST BEFORE SUNSET