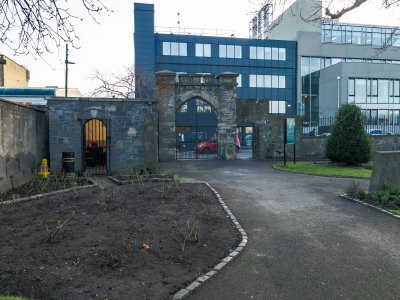 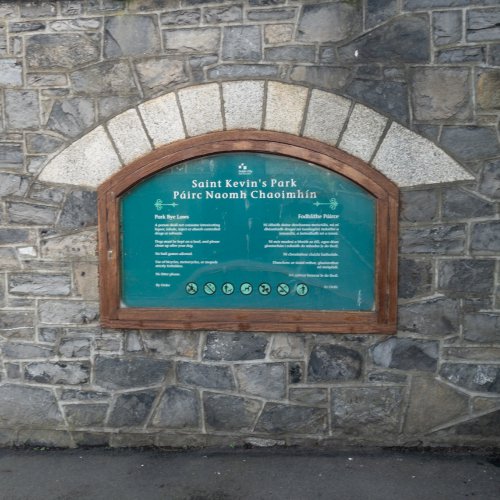 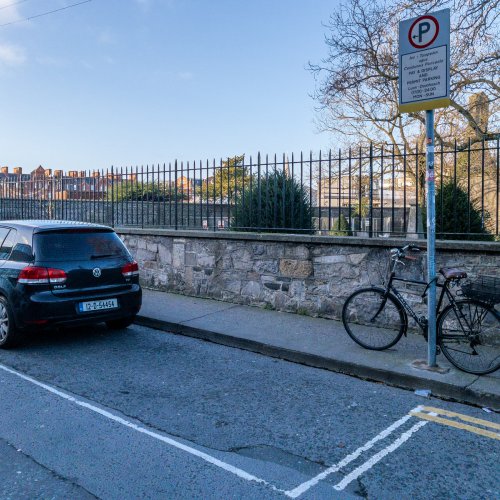 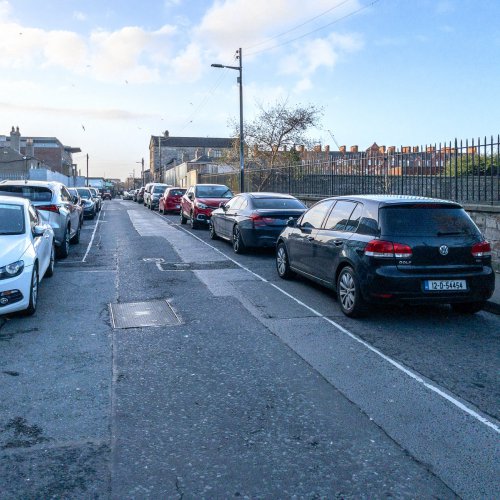 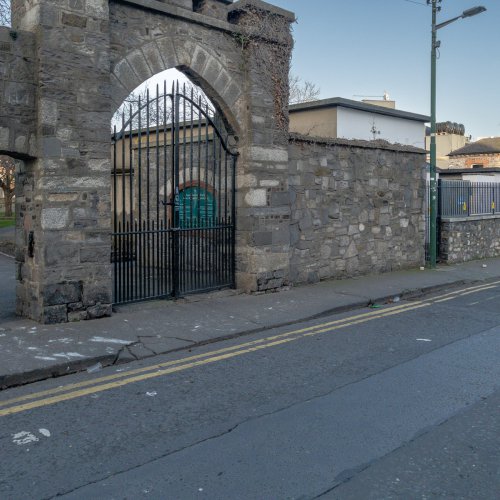 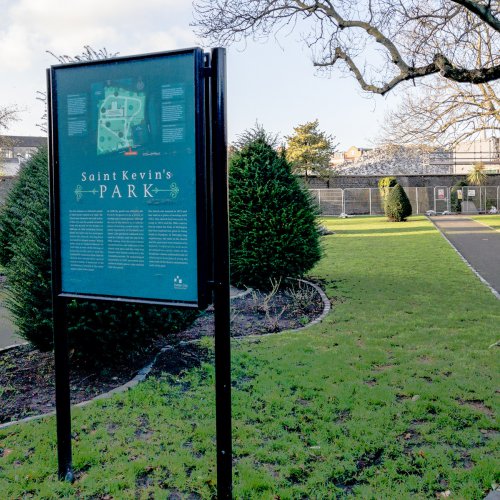 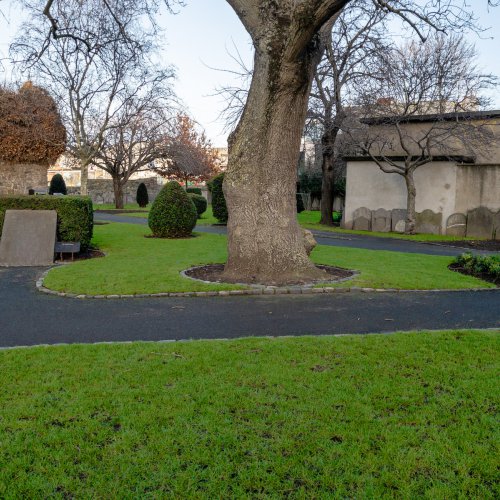 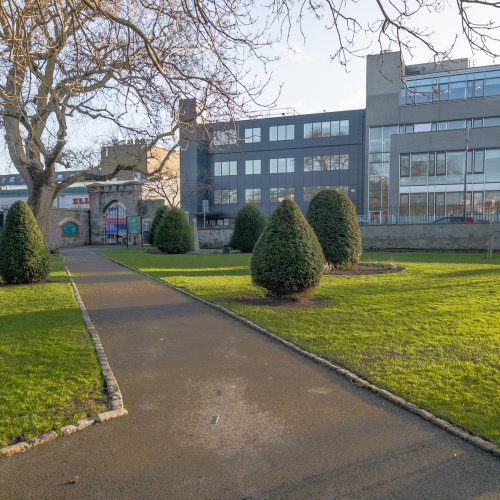 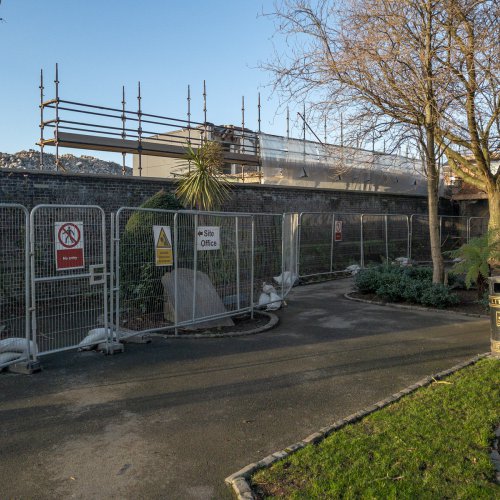 I visit St Kevin's Park and old Church every year at Christmas but this visit the place felt very different, as if something was missing. Initially I thought that it was the lack of people in the park but a I was about to leave I suddenly realised that Kevin Street College was missing.

In 1963, the Minister for Education signed a contract for a new building for the College of Technology at Kevin Street. The project was completed in 1968, with Hooper & Mayne as the architects. It was described as an International Style building, with the administration and entrance block to Kevin Street capped by a wavy canopy on the fourth floor.

The Kevin Street College site was sold in April 2019 for €140 million: https://www.irishtimes.com/culture/art-and-design/frank-mcdonald-what-s-not-to-like-about-dublin-s-new-kevin-st-development-quite-a-lot-1.4321803

There was a St. Kevin's Church in what is now St. Kevin's Park, Camden Row, Dublin, Ireland at least as far as the 13th century. After the Reformation, it became an Anglican Church. The original church was replaced around 1750 by a new one, closed in 1912 and now in ruins.

Both churches were dedicated to Kevin of Glendalough. There is also a Catholic St. Kevin's Church a short distance away on Harrington Street. During the 17th and 18th centuries many notable people resident in the suburbs south of the city were interred here. After the Reformation, although a Protestant cemetery, it had come by custom to be used by Catholics and the Quakers.

Hugh Leeson, brewer, whose gravestone lies against the south wall of the church and whose family gave its name to Leeson Street and became Earls of Milltown and owners of Russborough House, county Wicklow.

The Moore Family (of Thomas Moore). In 1825 John D'Arcy, owner of Anchor Breweries, the second largest porter company in Dublin at the time, was to be buried in St. Kevin's cemetery, having died suddenly after falling from his horse. When his funeral procession from Francis St. reached St. Kevin's cemetery the sexton, under the authority of the Protestant Archbishop of Dublin, Dr. Magee, met it at the gate and forbade Catholic prayers being recited at the grave-side; they had to be said on the roadway. The mourners retreated peacefully, but a huge outcry erupted as soon as the facts became known, which reached the ears of the Lord Lieutenant, The Marquess Wellesley (brother of the Duke of Wellington, and himself married to a Catholic). He expressed disapproval of Dr. Magee's order, and despite much opposition (cemeteries were a valuable source of income to their owners) tried to alleviate Catholic grievances. Daniel O'Connell used the scandal provoked by this to such effect that he was able to get through the legislation in establishing Golden Bridge (1829) and Prospect (1831) cemeteries, which led to the establishment of Glasnevin Cemetery.

At the start of the 19th century the cemetery, like many others in Dublin, became a target of the body-snatchers, although it was surrounded by high walls (changed to railings in the 1960s). In February 1830 a Frenchman named Nagles and his friend were attacked by a group of "sack-em-ups" lying in wait near the cemetery. The criminals' attention was diverted by the arrival of a cart-load of dead bodies, giving Nagles the opportunity to escape and notify the police at Arran Quay, who apprehended the culprits.

On one occasion a body-snatcher was chased as far as Thomas Street, where he finally dropped his booty—the body of a young girl.

In June 1961 the body of a local five-year-old boy Tommy Powell from Cuffe Street was found in the graveyard. Blood-stained stones found nearby indicated that he had been murdered, but despite an intensive investigation, the murderer was never discovered. I HAVE ALWAYS LIKED THE KODAK BUILDING

This building, which I have always liked, is at the corner of  Rathmines Road and Blackberry Lane and it is known as Kodak House or the Kodak Building.