LIFEBOAT AND NEARBY MEMORIAL

LIFEBOAT AND NEARBY MEMORIAL

The SS Palme, a 1,114 ton barque, was owned by the Erikson family of Mariehamn, Finland, then part of the Russian Empire. She sailed under the Russian flag of horizontal white, blue, and red. On 18 December she set sail from Liverpool bound for South America to import hardwood. She was commanded by Captain Wiren. He was accompanied by his wife and child. There was a crew of seventeen, three of whom spoke English.

A storm described as "the most severe of the century" developed. The Palme tried to seek shelter in Dublin Bay, but was driven south-east. It was mid-winter and extremely cold. The sea was so heavy that waves were crashing over the light house at the end of the East Pier of Dún Laoghaire. On Tuesday 24 December the Palme was seen dragging her anchor off Merrion strand. The Palme was in danger of being smashed on the rocks. She fired distress rockets.

A new lifeboat, Civil Service Number One had recently been delivered to Kingstown (now Dún Laoghaire). Under Coxwain Alexander Williams it went to assist the Palme. As she approached the Palme, the crew lowered the sails and rowed. Then, in full public view, the lifeboat was raised by a mighty wave and then capsized. Some of the lifeboat crew managed to climb onto the upturned hull. The crew of the Palme then tried to launch their longboat, in the hope of rescuing their rescuers. This longboat was smashed by the waves. The older lifeboat Hannah Pickard, under Coxswain Horner, then went to sea. She was also capsized. Fortunately she righted herself and her crew all got back on board. She was driven ashore at Vance’s Harbour, Blackrock. The Poolbeg lifeboat, under Coxswain Captain Dalton, was also launched. She found conditions ‘impossible’ and had to turn back. Two tugs, Flying Sprite and Flying Swallow also tried and failed. All hope of rescuing the Palme was now abandoned. On Christmas Day, 25 December, crowds watched and prayed as the Palme was being broken by the gales. There was widespread public and press interest.

On St. Stephen's Day 26 December, the Irish Lights steamer Tearaght under Captain McCombie managed to reach the Palme and rescue all twenty on board. In addition, they rescued the ship’s cat. By then eight bodies of the lifeboat men had been recovered. In time, all fifteen bodies were found.

The funeral was the largest seen in Dún Laoghaire. Flags were lowered in all European ports. All fifteen were buried together in Deans Grange Cemetery. A fund was raised to support their dependents. There were donations from the ship’s owners in Finland and from ‘the people of Russia’. There is a plaque on the old lifeboat station wall and a granite memorial. Every year the event is remembered. At noon every Christmas Eve there is a procession along the East Pier, led by a piper. A short service is then held.
NEARBY: THE OLD TOWN HALL
NEARBY: VICTORIA MEMORIAL FPUNTAIN
RETURN TO THE PHOTO DIARY FOR FEBRUARY 2018 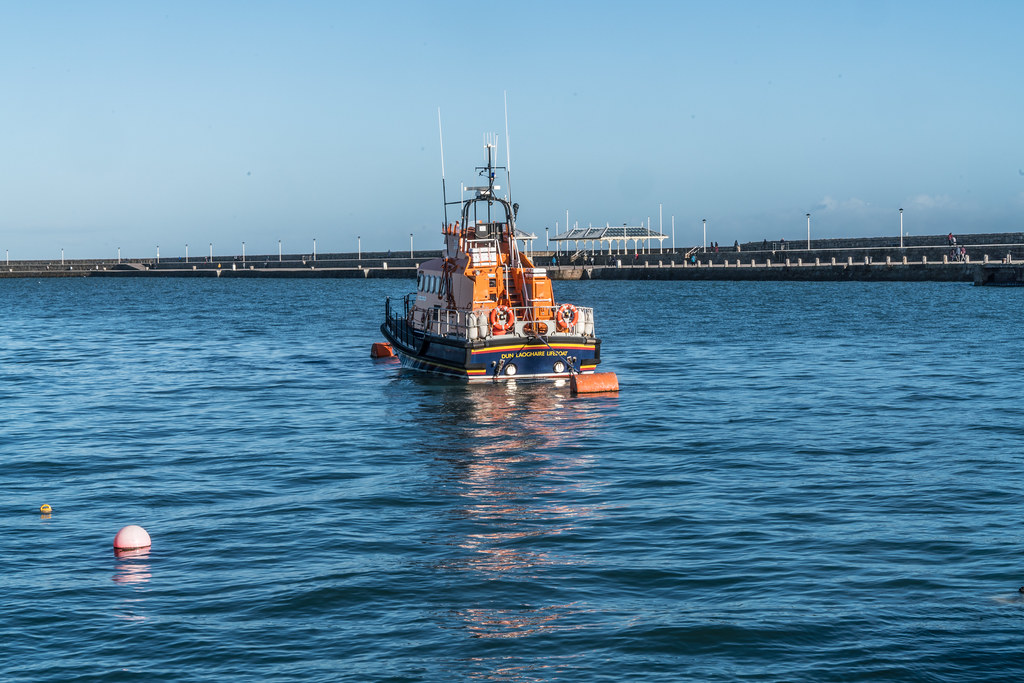 LIFEBOAT AND NEARBY MEMORIAL 001 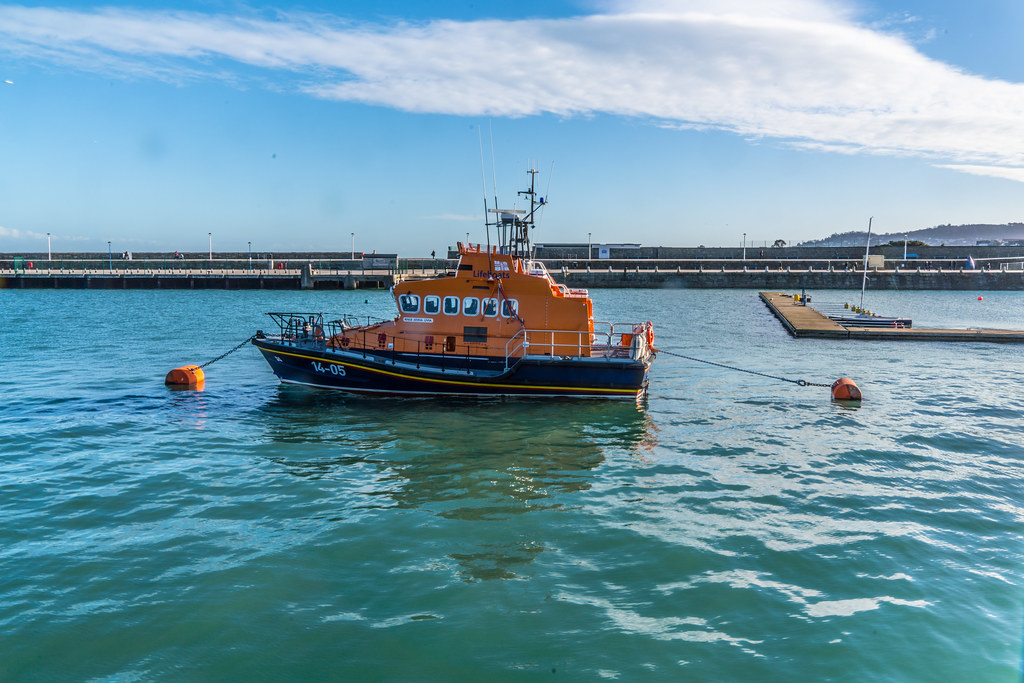 LIFEBOAT AND NEARBY MEMORIAL 002 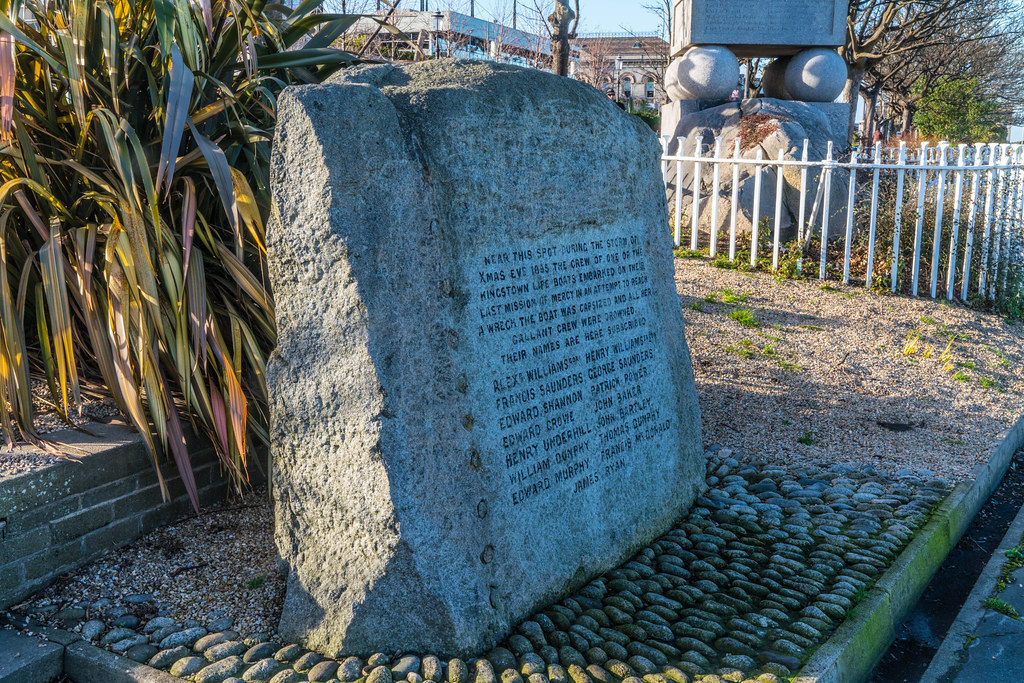 LIFEBOAT AND NEARBY MEMORIAL 003 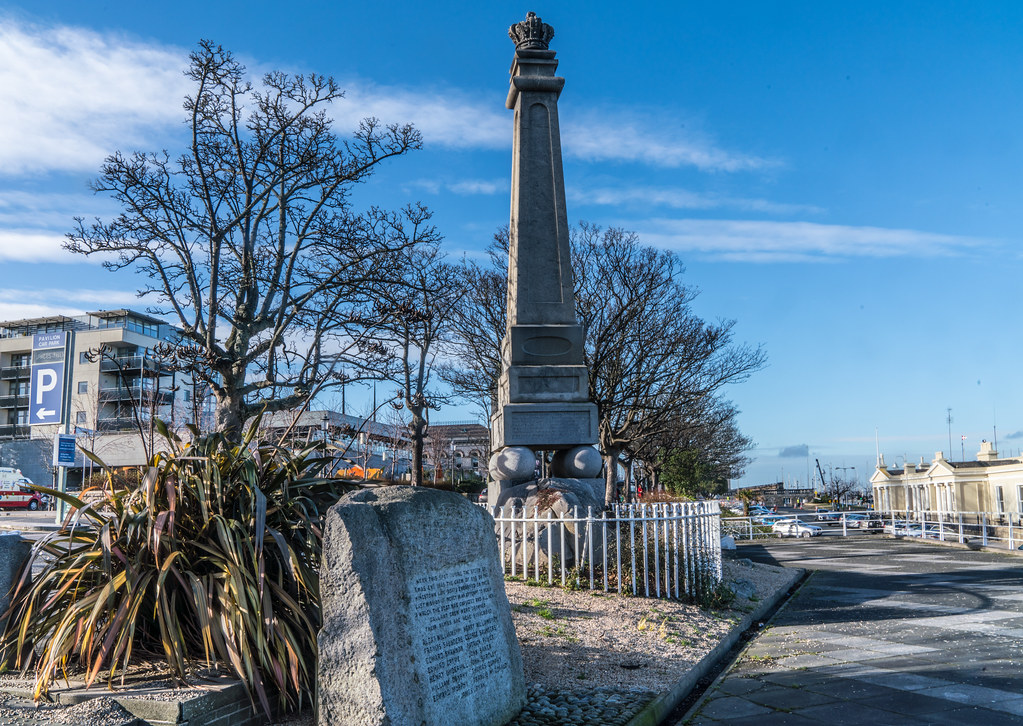 LIFEBOAT AND NEARBY MEMORIAL 004 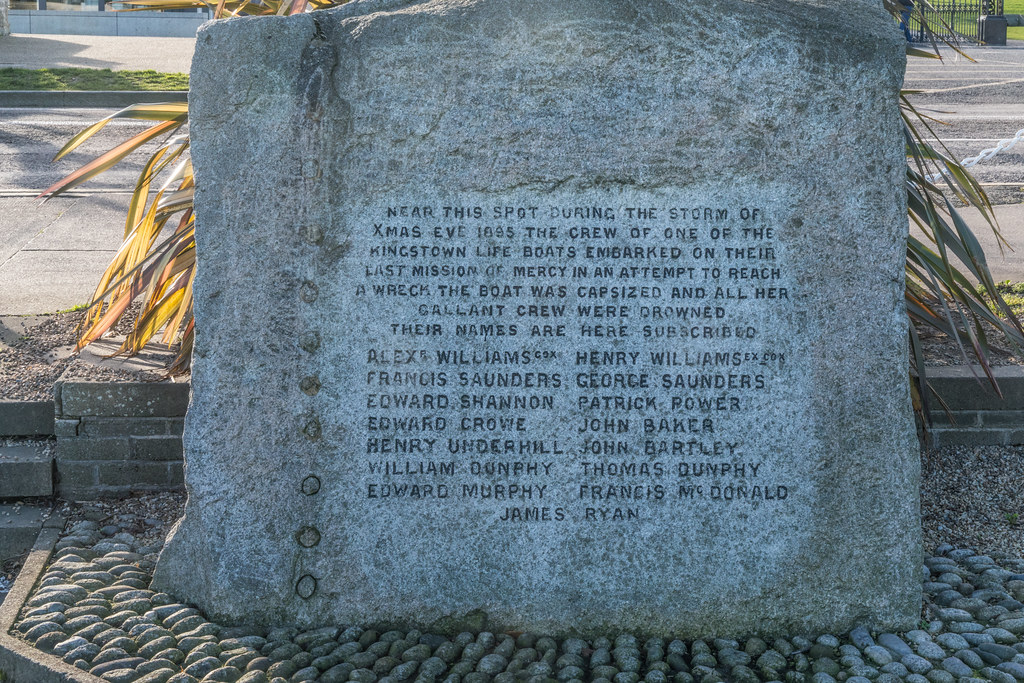