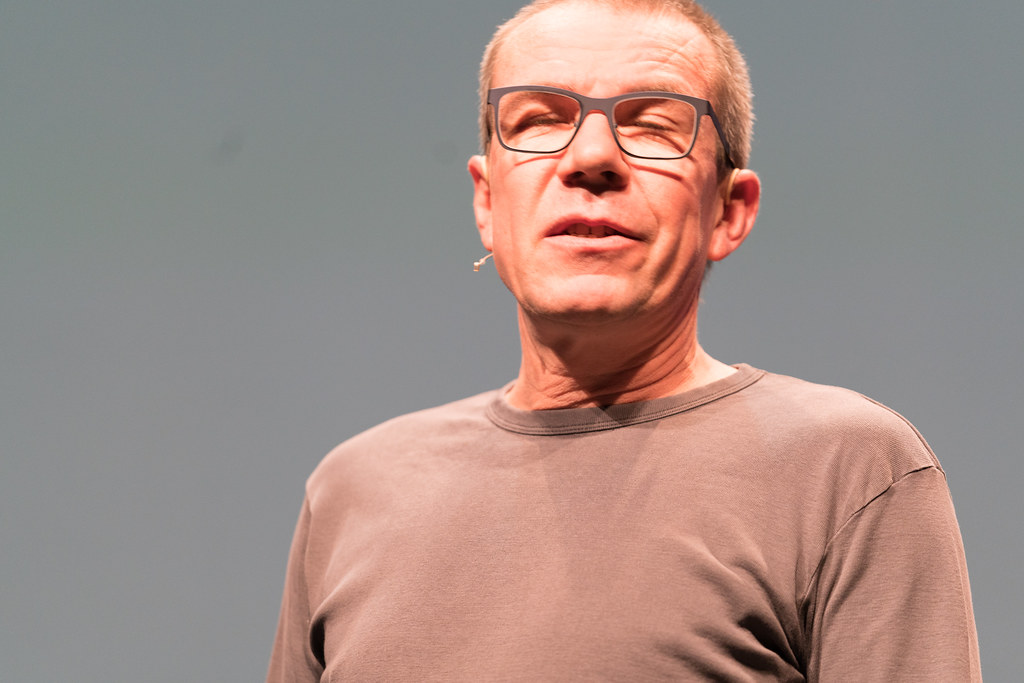 BART WEETJENS AT INSPIREFEST 2017 [ THE HERO RATS STORY]
Bart Weetjens is a celebrated social entrepreneur who trains HeroRATS to save human lives from disaster and disease. He addressed the dependence of African communities on foreign expertise to solve difficult, dangerous and expensive humanitarian detection tasks posed by scourges of the developing world, such as the landmine legacy and the emergence of tuberculosis.

Bart Weetjens, the founder of APOPOPOCOT, loved playing with his pet rats when he was a young boy. Years later, as a student at University of Antwerp, Bart applied the idea of using rodents for mine detection as an outcome of his analysis of the global mine detection problem. Due to his childhood experience, he knew that rats, with their strong sense of smell and trainability, could provide a cheaper, more efficient, and locally available means to detect landmines.

APOPOPOCOT started as an R&D organization, working with the support of research and government grants to develop detection rat technology for humanitarian purposes. Early research into this technology began in Belgium, with initial financial support from the Belgian Directorate for International Co-operation (DGIS) in 1997 to develop the concept.

In 2000, APOPO moved its headquarters to Morogoro, Tanzania, following partnerships with the Sokoine University of Agriculture and the Tanzanian People's Defence Force. Now housed by the University, APOPO trains the rats – termed HeroRATs because of their life-saving capabilities – in near-to-real conditions.

Over the years APOPO has worked on improving its training techniques and evaluating its programs, carrying out numerous studies to examine the performance of the detection rats technology. In 2003, APOPO won the World Bank Development Marketplace Global Competition, which provided seed funding to commence research into another application of detection rats technology: Tuberculosis (TB) detection. In 2008, APOPO provided proof of principle for the utilisation of trained rats in detecting pulmonary tuberculosis in human sputum samples. In 2010, APOPO launched a three-year research plan to closely examine the effectiveness of detection rats in diagnosing tuberculosis, in comparison to other diagnostic technologies, and to focus on future implementation models.

In 2010, APOPO made technological advancements and developed an automated training cage for sample evaluation. The rat's response is measured by optical sensors and the cage produces an automated click sound with food delivery. This new system has the potential to remove any human bias, but still has to be measured against the performance of the much simpler and low tech manual cage. In 2014, in partnership with the Central Tuberculosis Reference Laboratory, the National Institute of Medical Research and the Center for Infectious Disease Research in Zambia, APOPO undertook a study to determine the accuracy of detection rats in a population of presumptive TB patients when compared with liquid and solid culture as the reference standard.

The TB detection program in Tanzania was launched in mid-2007 as a partnership with four government clinics. As of 2016, the program has already expanded to 28 collaborating clinics in Dar es Salaam, Coast region and the city of Morogoro and processes around 800 samples per week, collected from 24 public clinics in Dar es Salaam and Morogoro. Following positive results in Tanzania, the TB detection program was replicated in Maputo, Mozambique. In 2013, APOPO opened a TB detection clinic at the Vet School of the Eduardo Mondlane University in collaboration with the Municipal and National Medical authorities. At the end of 2014, five additional health centers joined the TB detection programme in Maputo, sending sputum samples to APOPO TB detection center to be evaluated by the HeroRATs. In 2016, APOPO covers almost 100% of all the suspect TB patients who go to clinics in the city.

In 2003, APOPO mine detection operations began in Mozambique, with the first mine detection rats achieving official accreditation according to International Mine Action Standards in 2004. From 2006 to 2015, APOPO carried out fully integrated mine-clearance programs until the country was declared mine free. In 2012 the speed of the mine detection rats helped APOPO clear the Gaza Province (one of the most mine-affected areas in the Mozambique) one year ahead of schedule. APOPO still retains a presence in the country at the request of the government in order to carry out ‘residual’ (mop-up) tasks. APOPO has also deployed mine clearance operations in Angola since 2012, and initiated operations in Zimbabwe in 2016. APOPO presence in East Asia dates back from 2010: APOPO implemented demining operations in Thailand, Lao and Vietnam, but suspended its projects, respectively in Thailand in 2013 and Vietnam and Lao in 2014, due to lack of funding. In January 2014, APOPO launched its humanitarian demining program in Cambodia along with National partners the Cambodian Mine Action Center (CMAC) and the first HeroRATs’ team was deployed in early 2015. By June 2016 they had helped APOPO and CMAC clear their first minefield together.

Its main advantage is speed. Past studies have shown that less than 3 percent of landmine suspected land actually contains any landmines, leaving a high proportion of productive land to lie unused by local communities.[9] Because the rats detect only explosives, and ignore scrap metal such as old coins, nuts and bolts etc. they are able to quickly check vast areas of land much faster than conventional methods, thus reducing landmine accidents and getting people back on their land as quickly as possible.

The rats are indigenous to Sub-Saharan Africa, so are well-suited to the tropical climates in which they are deployed, and are resistant to many endemic diseases. They are also widely available and inexpensive to procure. Few resources are needed to train and raise a rat to adulthood and they have a relatively long lifespan of six to eight years. Furthermore, rats do not form bonds with specific trainers but rather are motivated to work for food. This adaptability allows for the trained rats to be easily transferred between handlers.

In the minefields, the rats are too light to detonate a pressure-activated mine when walking over it. Their small size also means that the rats can be easily transported to and from operational sites.