In recent years Dublin City Council’s Parks and Landscape Services have carried out an extensive works programme to upgrade the park and make it public park more accessible for the citizens of Dublin and visitors to the city.

The works included a new circulatory path system, upgrading of the existing pedestrian gates and the provision of a new pedestrian gate at the south west end of the park. Existing memorial structures have been upgraded and general landscape improvement works have been carried out. The total cost of the works, were in the order of €120,000. The good news is that the Croppies Acre 1798 Memorial Park, Wolfe Tone Quay, Dublin 7  is once again open to the public and, much to my surprise, it is open 24 hours seven days a week.

The name ‘Croppy’ was used in Ireland in the 1790s and was a reference to the rebels who closely cropped their hair to mimic the French Revolutionaries of the period who cut their hair in contrast to the aristocracy who wore powdered wigs. Three hundred captured rebels were put to death in the Smithfield area of Dublin and their bodies were suspended from the bridges along the River Liffey. They were then buried in the area now known as Croppy’s Acre in front of Collins Barracks, now a branch of the National Museum of Ireland.

Historically the Croppies Acre was located on land under common pasturage and part of what was termed ‘Oxmantown Green’.

In the 17th century, a portion was later presented to the Viceroy, the Duke of Ormond to build a palace, however this was never built and the site was sold to the City Authorities for a Barracks. Built in 1704, it served as a military base for 250 years, it was formally the Royal Barracks and later Collins Barracks.

The Esplanade where the Croppies Acre is located today was fully constructed by the 1850s, complete with boundary walls and ornate railings. During the Great Famine, the Esplanade was the site of a food kitchen. By the 1900s, the land was levelled to form two football pitches for the military. In 1997, the Decorative Arts Section of the National Museum was opened in Collins Barracks and the Memorial Park was subsequently designed and laid out in 1998. 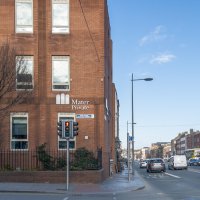 Eccles Street began on 6 March 1769 when Isaac-Ambrose Eccles leased three parcels of land in the area. The street is named after his family, including his grandfather Sir John Eccles, Lord Mayor of Dublin 1710–11.

Eccles Street began on 6 March 1769 when Isaac-Ambrose Eccles leased three parcels of land in the area. The street is named after his family, including his grandfather Sir John Eccles, Lord Mayor of Dublin 1710–11. 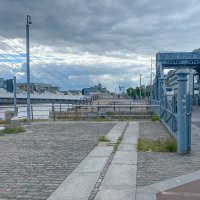 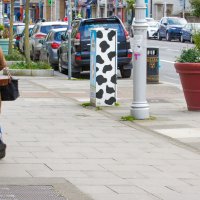 RANDOM IMAGES - MANOR STREET AND NEARBY IN STONEYBATTER

In the 1950s the Dublin Cattle Market Stoneybatter (known locally as 'Cowtown'), was the largest weekly livestock sale in Europe

RANDOM IMAGES - MANOR STREET AND NEARBY IN STONEYBATTER

In the 1950s the Dublin Cattle Market Stoneybatter (known locally as 'Cowtown'), was the largest weekly livestock sale in Europe